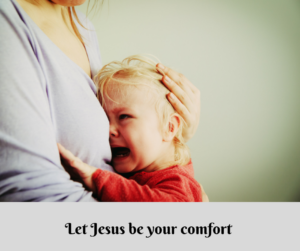 Have you ever cried?

I mean really cried.  Hard core, loud, let-it-all-out, ugly kind of cry?  The kind where you think “I’m not going to cry until later” and then one little tear escapes out of the corner of your eye; the lump in your throat feels like a stuck vitamin and there is no amount of swallowing that’s going to send it away.

The kind where once you take in the next breath there’s no control.  It’s as if the dam breaks lose and the flood comes roaring out for the world to see.  The kind where it hurts so bad you have to find someone to blame.

I’ve been there.  And I imagine you have, too.  Whether it’s as simple as a sad movie, or as complicated as a rejected relationship, an intentional or unintentional hurt by someone else or a death, it’s hard.  It’s ugly.  But sometimes just crying those ugly, hard-core sobs can somehow release the pain of trapped-up hurt, if only for a while.

Sometimes it’s hard for us to imagine Jesus being a person like you and me.  We hear it; we’re taught it in church; we read about it, but because He is God’s Son, it’s hard to sometimes wrap our minds around his “humanism”.  In John 11, John tells of a time where Jesus cried just like you and I cry.

His friend, Lazarus was sick and had died.  When Jesus went to the tomb where he was placed, Jesus saw the sister of Lazarus crying as well as weeping from his other friends.  The scripture says “he (Jesus) was deeply moved in spirit and troubled”.  And then the shortest, yet one of the most moving scriptures is written.

Yes, Jesus is just like us.  When He saw others hurting, He cried.   He may have even ugly, snotty, snorting cried.  He was human and felt the same things we feel today.  Yes He is part of the Trinity of God but the reason we can have a relationship with Him is because He experienced and felt things like we feel and He understands.  He wants to comfort us like our friends.

He is our friend.  Through sniffles, snorts, sobs and smiles, He wants to be our friend.

Let’s let Him wipe away our tears and wrap His arms around us no matter whether we need a tissue or a whole roll of toilet paper.  🙂