Have you ever seen one of those little plastic waving hands on a suction cup on the window of a vehicle and due to the movement of the vehicle the little hand continues to wave at the person behind?  It’s the “hello driver” wave.  It makes me smile.

I was on a narrow country road the other day and had to pull over before a single-lane bridge to let a vehicle pass through first.  The driver gave me a friendly “thank you” wave.

During interstate construction, people wave merging drivers in with a “you’re welcome to come on in” wave.

You see a coworker down the hall – too far to yell – and you give the friendly “how ya doin'” wave.

You see a friend across the gym at a ballgame and you give the “miss you” wave.

You’re at a baseball game and the whole crowd cheers, stands and sits for a “united together” wave around the stadium.

Peter gave Jesus a “hey you” wave when he realized it was Jesus walking on the water.  Jesus responded with a “come on out here, my friend” wave and Peter walked on the water.

Jesus is also waving at us today trying to get our attention.  He’s giving us the “I’m right here; did you forget about me” wave.  Look around and see Him waving at you in the sunrise and the sunset; the birth of a child and the birth of puppy; the brush of the wind and the sound of the thunder.  Acknowledge Him with the raising of your own hand – you know the “thank you, God. You are awesome” wave. 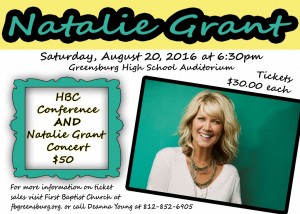 NATALIE GRANT IS COMING TO GREENSBURG, IN
August 20th @ 6:30 at Greensburg High School
Tickets are $30
Contact me if you want to go!

She will also be performing an afternoon set at
HOPEWELL BAPTIST CHURCH
during their all-day women’s conference! What a great opportunity. Tickets for that are also $30.

**If you wish to attend both events, you can get a combo ticket for $50!

****Contact me with any questions. You can also go to First Baptist Church and click on the link and order your tickets through the website. It may be a little confusing when you go to order the tickets but you can choose either Greenburg event, Hopewell event or both events by clicking on the down arrow.   HOPE TO SEE YOU THERE!!

Today the world lost a great one in Pat Summit.  Some people will say she was just a women’s basketball coach.  But she was much more.

I was blessed to meet Pat on several occasions when our girls went to camp there.  She was always there helping kids learn the fundamentals and watching their games and helping coach.  She was hard on her players but they loved her.  They all STILL talk about how much of a friend she was to them even after they left Tennessee.  She had a 100% graduation rate showing that she cared about them outside of basketball.

Her book, Reach for the Summit, had a great impact on me and I shared it with several coaches over the years.  The summary of the book is that she got to know each of her players individually.  She believed that you had to know how they responded to people.  She knew some could get pumped up by being patted on the back; some by being yelled at; some by being ignored; some by being on the starting 5 and some by coming off the bench.  She knew her player’s families, heartaches and what made them smile.  She made them feel special.

When I met Pat, she was always so kind and acted like I was her friend.  She talked every-day things with me.  We learned we were sorority sisters (Chi Omega) and chatted a bit about that.  She always autographed anything you requested.  I have a sweatshirt with her precious signature on the shoulder displayed in my home.  She truly loved people.

The last time I met Pat, she looked terrible.  I found out later that her husband had just left her after having an affair.  She was admitted to the hospital the day after we left.  Slowly she went down hill and we were so sad to learn of her dementia and Alzheimer’s diagnosis.  We feel like she was a friend.

Our household is sad today.  We’ve followed Tennessee women’s basketball for years.  We’ve attended more Tennessee games than I can even count.  We were fortunate to celebrate with the team in Tampa for Pat’s last NCAA Women’s Basketball championship.

She touched many lives – more than she will ever know.  I hope today we can live out Maya Angelou’s quote and Pat Summit’s legacy and let people know how truly special they are.

I love the fashion blog, Grace & Beauty.  Cyndi Spivey has some cute ideas for fashion and she always includes a short encouraging devotion and Bible verse that seems to resonate with me each day.  I am always looking up fashion ideas on Pinterest and “pinning” outfits that I like.  I enjoy reading about the next big splash of color in both the fashion and the decorating world.

One of the things I read stated that horizontal stripes can make a person look “wider”.  I don’t have a lot of outfits with stripes and I don’t think I have any with horizontal stripes.  I certainly don’t want to look wider!

We know the saying “stars and stripes” which refers to the American flag.  Many soldiers wear those symbolic “stripes” in their heart and visible “stripes” of physical wounds as they live with sacrifices made for our country.

We know Jesus had stripes on his body as He was whipped on the cross while He was dying for our sins.

When thinking of “stripes” this way, they become about sacrifice – a badge of honor.   Stripes on the flag; stripes from emotional and physical wounds from sacrifice.  It gives a different meaning to how we “wear stripes”.

What stripes do we wear today for Christ?  Do we sacrifice anything for Him or do we just want the easiest way?  The sacrificial stripes coming from serving and defending Christ won’t make you look wider.  They aren’t a no-no in the fashion world.  Stripes we wear for Christ make us stronger; bring us closer to Him.

Stripes.  Worn with honor.  For the one who wore them on the cross.  What stripes will you wear for Him today?