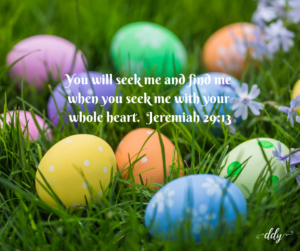 I love a good Easter egg hunt.  I love coloring eggs and then filling plastic eggs with a dime or a nickel or a piece of candy.  But I always have one “golden” egg for my great-nephews that has a bigger prize inside…like a $5 bill.

I watch these boys look high and low for eggs.  They look under things and stretch their little legs to see over things.  They reach for the sky to feel on top of things.  They run and then tip-toe as if sneaking upon the bush will allow them to grab the egg faster.

They are so excited when they get those eggs and begin opening the plastic ones to see the gift inside.  The smiles, the laughter and the excitement just warms my heart.

Jesus is just like that in our lives.  He keeps showing Himself in all the little things of our lives.  He is waiting in the beautiful tulips in the yard. He is leaving blessings in the morning sunrise.  He is smiling on you with a full moon shining down on a snow-covered field.

He is in your morning walk and your evening meal;  in your workplace and your home.
He is leaving hints of His presence in your chance meetings and your surprise fortunes.

Yes, He is everywhere just like those Easter eggs I hide for the boys.  All we have to do is look for them.  Run, tip-toe, stretch, look, feel, open and receive. 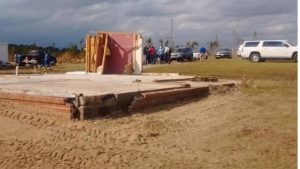 Standing right there all by itself on the empty foundation that had been swept clean by the horrific winds.

Just a few pieces of plywood and 2×4’s in an upright position.

What?  A prayer closet?

A few weeks ago deadly tornadoes ripped through Alabama.  But the calm after the storm found this amazing site.  Standing on the foundation, all by itself, was a grandmother’s prayer closet.  It and the whole family survived this tornado.

How in the world?  “My God is awesome!”  posts a member of the Billy Graham Rapid Response team.  Yes, our God is awesome.  That’s how.

Never, ever give up hope.  Never, ever stop praying.  God is working, even in the middle of the storm.  Go to your prayer closet and ask Him to sweep away the devil and show Himself in a mighty way.  Shine, Jesus, shine! 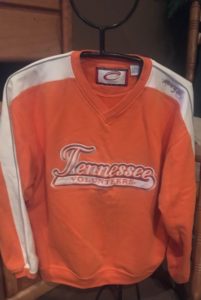 It’s March Madness basketball time!  One of my favorite times of year.

There’s a lot of scientific data and thought that goes into choosing which top 66 teams get a chance to play in the Biggest College Tournament of all times.  A lot of basketball fans agonize over that data fantasizing about creating the perfect bracket.

Me, on the other hand…I fill out my brackets based on a different set of criteria. A much more FUN way of selection.   🙂

Here’s a little behind-the-scenes look at the carefully-thought-out details of how I go about selecting my bracket:

Liberty – because they are a Christian school.

Northern Kentucky – because my friend’s husband played basketball there.

Michigan – because I love yellow and navy together.

Oregon – because their fight song is the same as my high school fight song.

UC Irvine – because I saw their men’s volleyball team play and they were awesome!

North Carolina – because Roy Williams seems like a nice guy.

Wofford – because I really like to say that word.

Purdue – because Carsen Edwards is my favorite NCAA player with his short little bowed legs and adorable construction-boot-like tennis shoes.

Tennessee – because I love the beautiful scenery in Tennessee.  I also love Grant Williams.  And anyone named Admiral deserves a championship!

So there you have it.  The Deanna Day Young high-level of Bracketology.

I’ve got Tennessee bringing home the nets in the official office bracket pool but, let me just say, I wouldn’t be sad if the Black and Gold Boilers bust my bracket and claim the title!

Who’s your NCAA team of choice this Madness Season? 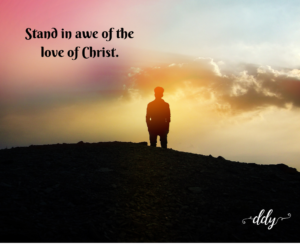 When I was younger, I had a fear of spiders and snakes and going to the basement in the dark.

As I grew older, my fears changed to things like the fear of not being accepted into my college of choice or fear of not finding a parking space close to the dorm to unload.

Maturity into adulthood found me outgrowing some of those fears but the devil found ways to instill new ones in me – like the fear of failure, the fear of rejection, the fear of not being good enough.

But as I grew spiritually, I also found that there is One who can crush the fear and send the devil packing.

“Do not fear” is written in the Bible 366 times.  One time for each day of the year including leap year! 🙂

It’s hard to wrap my head around it all but I do know that my God can crush the devil.  And when that happens, fear doesn’t have a chance.  I’m standing in His love!