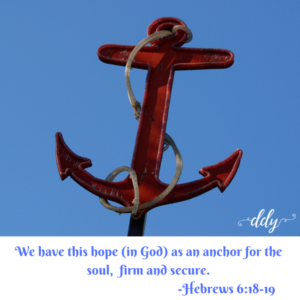 Bill and Tom set out for another fishing adventure.  High hopes were in the air that the fish were biting this time.  These two had a reputation for returning home empty-handed from a day of fishing.  But it didn’t stop them from days of laughter and celebration of friendship.

Tom got the boat in the general area of “good fishin” and then handed the roped-anchor to Bill to throw overboard to secure the boat in place.  As Bill threw the heavy anchor over the side of the boat, the thick rope slid through his fingers as the anchor continued to find its way to the bed of the lake.

And then it was gone.

It ended.  The last piece of the chunky tie was gone.  In the water.  With the anchor.  At the bottom of the lake.

Yes that is a true story and one that we still laugh about today between my dad and his ole  fishing buddy.  I will say that there was not a lot of laughing going on at the time of the incident but as in all things….time heals…and laughter follows.

It’s a great metaphor as well that I use in my life.  There are two ways to look at an anchor.
1.  It can be a negative thing in that it is something that keeps you from moving forward.
2.  It can be a positive thing when God is your anchor.

Is it worry? Fear? Anger?
Maybe it’s a toxic relationship.
Could it be unforgiveness?  Stubborness?  A nagging continued sin?

Whatever it is, it’s time to let the rope of that anchor slip through your hands and allow God to move you away from those negative things into a life where He can guide you through the breeze, sailing you into unchartered waters of blessings, love and peace.

It’s time to cling to a new anchor that is secured to your heart…the anchor of freedom in Christ.  This anchor is one that isn’t heavy but rather one that is stable, secure and trustworthy.

It’s an anchor of Hope.  Hope in Jesus.

Let go of the rope that holds the anchor of negativity in your life.  I promise you won’t be sorry the chunky rope goes overboard.  🙂

Now reach for the Anchor of Christ.

You might want to hold on though because this fishing adventure is guaranteed to be a great one!