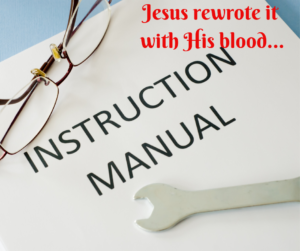 Nothing seems easy these days.

I don’t like to read directions either to fill out forms or to read a map.  I want the areas highlighted I need to fill out and a GPS named Sally to tell me which road to take next.

As I have been reading the Bible through this year, I am now in Leviticus.  Sidenote: very boooorrring book in the Bible.   (Am I allowed to say that about the Bible?)  🙂   But even though it’s boring, I do find the methodology interesting.

God gave the Israelites specific instructions on what to offer as sacrifice for whatever sin they committed.  The sacrifice may be an animal  or a grain offering.  He told them exactly which kind of animal to sacrifice for which sin; how to butcher the animal; where to place certain parts of the animal; which parts were okay to eat; which parts were forbidden to eat; where the blood should be drained; what grain to use and whether the sacrifice offering included yeast or no yeast.

There were a lot of directions.  And if it wasn’t done correctly, it would need to be redone.

I’m so thankful for the sacrifice of Jesus.  I’m so thankful that although He suffered on the cross in a horrible death, that He did it so that we don’t have to follow all of those directions of knowing what to sacrifice for what sin.  His death and resurrection actually made it simple for us.

Only one direction.  One Way.  One Truth. One Life.

It really is that simple.

Accept Jesus.
Ask forgiveness.
Trust Him.
Follow Him.
Love Him.

It’s the easiest directions for the biggest reward you will ever experience.

So put away the GPS and the long list of to do’s and accept the simplest gift from the One who rewrote the directions for us.