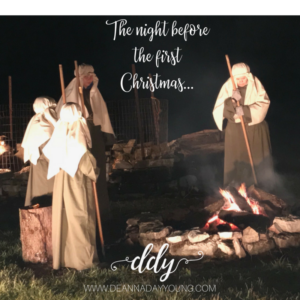 ‘Twas the night before the first Christmas and all through the town
Folks were sleeping in hotel beds while Mary and Joseph walked around.

The people were ready for the census to be done
In hopes to return soon to their precious homes.

The animals were nestled all snug in the hay
Just minding their own business on this particular day.

And Mary in her nightgown and Joseph with his staff
Were settling in for a long night with no naps.

When out in the field there arose such a clatter.
The shepherds fell to their knees for a message that would matter.

The angel told them to be calm for he had an announcement to make.
And the shepherds bowed down as their bodies began to shake.

“You should go to Bethlehem even though it may be far.
A king has been born.  You must follow the star.”

The shepherds arose, to their sheep gave a whistle;
And away they all went, walking fast as a missile.

They followed the star to Bethlehem town
Where animals were feeding and all lying down.

When what to their wondering eyes should appear
But a baby wrapped in rags with straw up to his ears.

With mom and dad and a baby with no bling
They knew in a moment it was the prophesied King.

Mary invited them in to hold his sweet little hand.
“His name is Jesus,” she said.  “He’s a special little man.”

The shepherds wanted to shout and tell all the nations.
So they left with their hearts filled and lots of inspiration.

This same little baby is today’s reason for Christmas cheer.
Invite Him into your heart and you, too, can celebrate Christmas all year.