Congratulations to the Jac-Cen-Del Lady Eagles on becoming STATE CHAMPIONS in Class 1A Basketball this weekend!  History was made.  JCD had never won a Girls’ Basketball State title.  But Coach Scott Smith did not forget those who paved the path through the years and who also played for that title but fell short.  Each year in basketball is different – players are different, competition is different, even rules are different.  But at JCD, the girls’ motto is “Tradition Never Graduates”.

After any kind of tournament championship, the tradition at JCD is for the championship team to lay down and “kiss the Eagle” on the gym floor.  Since the floor was redone and it was decided to not have the Eagle in the middle of the floor anymore (against my wishes – hahaha), the winning team circles around the JCD on the floor and kisses it.

With “Tradition Never Graduates” motto in mind, at the pep rally following the championship victory, Coach Smith asked any girls’ basketball player who had ever played at JCD to stand.  Past girls’ basketball players were peppered throughout the gym.  He then asked them to make their way down to the floor, and join the state championship team in the traditional “kiss of the eagle” because they were a part of the victory by paving the way at JCD!  It was in true “Scott Smith style and class”!!

I’m sure the girls who had sought this championship were thrilled for Scott and the team but there may have been just a little tiny bit of the “I wish it could have been me” feeling inside.  I have two girls who made a good run at it themselves.  Scott knew this feeling because he had coached a lot of those girls over his many years at JCD.  He knew just what to do to include them.  Tradition Never Graduates!!  It’s a family at JCD and we are proud to be a part of it! 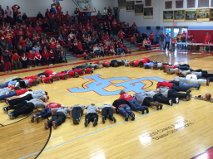