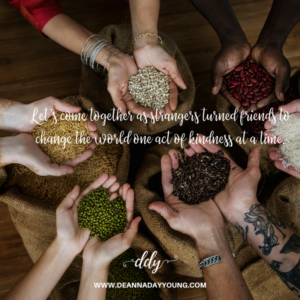 Jesus tells a parable to the experts in the law who were trying to test Him.  The story is about a Good Samaritan who helped a man who had been beaten and left by the side of the road to die.  Two other people had passed him by but the Samaritan took pity on him and bandaged and treated his wounds.  But he didn’t stop there.  He took the beaten man, on his own donkey, to an inn and took care of him.  Then one step more… he left the man and paid the inn keeper to care for him and he paid all extra expenses.

Jesus asks the experts in the law who they thought showed the example of unconditional love – kindness to a stranger.  The experts replied, “the one who had mercy on him.”  Jesus told him, “go and do likewise.”  [Luke 10:25-37]

We should be the same.  Can you imagine how much better of a world we would live in if everyone was willing to show kindness to everyone they met?

My challenge for us today is to look for ways to be kind to a stranger.  Start small.  Allow someone to go in front of you in line at Wal-Mart or a restaurant or coffee shop.  Let someone merge in front of you in traffic.  Compliment a stranger on their outfit or hairstyle or their children.

Let’s show a little of Jesus by pretending, just for starters, that we never met a stranger along our journey in life. Together we can change the world one small act of kindness at a time.