WOW!  There is so much going on in this world.  Yesterday was a special day of remembrance on the anniversary of one of the worst tragedies in our country.  I saw firefighters and police officers standing on decorated overpasses as I drove home from Indianapolis with signs that said “Remember 911” and “Honk for Remembrance of 911”.

We have the storms and hurricanes in Texas  and Florida that have gone up into the Carolinas and Georgia and still causing devastation as they move into other states.

There are wildfires blazing in Montana and spreading to surrounding states with the smoke and ash damages traveling hundreds of miles to wreak havoc on other locations.

There are many other “storms” going on in our land and around this world today that need our prayer and many people who need our encouragement.  Today is National Day of Encouragement and I urge you to find someone who needs a word or a note of encouragement today.  Cards, text messages, emails, phone calls, flowers, prayers and gifts are all good outlets to show encouragement.

In Matthew 14:22-33 we see the story of Jesus walking on the water.  What a great story of encouragement!  Jesus was praying on a mountainside and the disciples were out in a boat sailing farther away from his location.  A storm had brewed up on the water and the wind and waves were slamming against the boat causing fear for the disciples.  Verse 25 says “during the fourth watch of the night Jesus went out to them walking on the lake.”

Now obviously, they were scared.  But verse 27 says that Jesus encouraged them.  He yelled out, “Take courage!  It is I.  Don’t be afraid.”

Jesus is saying that to us today.  We are in the midst of all of these storms of rain, flood, and fire but also in the midst of discouragement, anger, fear, murder, war, adultery, bitterness, rage and backstabbing.  The wars of the evil one are worse than we can even imagine.  But Jesus is coming right at us, arm extended saying, “Take courage.  It is I.  Don’t be afraid.”

Be encouraged today on National Day of Encouragement that Jesus is in control.  And then share that encouragement with those who are struggling.  We can’t fix everything but we can encourage people to know the One who can! 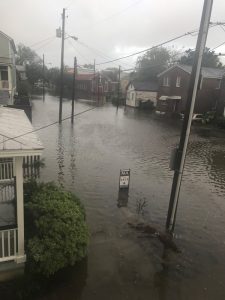 Picture courtesy of a friend from outside her house.