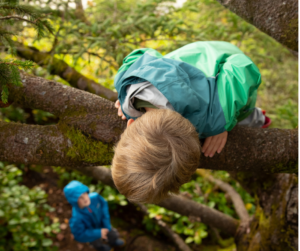 He was short in stature and disliked by most.
He worked for today’s version of the IRS and had a very distinct reputation for taking (and keeping) extra money in his collection of taxes.

And I believe he had FOMO.  The fear of missing out.

He was a very curious man.
He didn’t want to miss out on finding out more about this new guy in town that everyone was talking about.

You see, this new guy was causing quite a ruckus.

People were in awe of Him.  It seemed they either loved Him or they hated Him.

And wee-little, curious Zacchaeus just wanted to see him so he could decide for himself.

So he climbed up in this Sycamore tree and was trying to hide when this new fella walked by.  But the new fella was no ordinary guy.  It was Jesus.  And He was already on the lookout for Zacchaeus.

As He walked by the tree, Jesus called Zacchaeus by name and instructed him to climb down and go have dinner with Him.  I can just imagine Zacchaeus.  He was probably scared to death on one hand yet excited on the other that this guy knew his name and wanted to get to know him better!

However, Zacchaeus was also probably a little reluctant because if Jesus knew his name, He probably also knew his reputation.  His sin.

But he climbed down and went anyway.  And I believe Zacchaeus believed Jesus was who He claimed to be and that wee-little Zacchaeus (as the song calls him) started following Jesus and lived a better life.  Luke 19: 8 quotes Zacchaeus as saying he will give half of his possessions to the poor and will pay back anyone he cheated times four.  He believed!!

Are you up in your own Sycamore tree trying to discretely hide from Jesus?
Are you afraid He will know your sin and not love you?
Do have a fear of missing out on heaven?

Jesus is inviting us down from whatever our Sycamore Tree is to get to know Him a little better.  He will forgive any and all of the bad things we have done and will love us with open arms.

Jesus wants no one to have FOMO.  He wants everyone to sit around His table in heaven for all of eternity.

Hold my hand and we’ll climb down together.