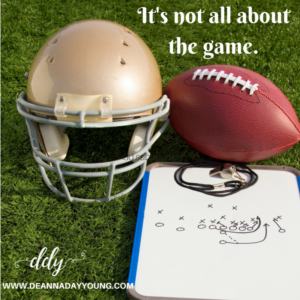 Doomsday.  The Monday after the last regular-season game in the NFL.  Coaches dropping like flies!  Do owners and GM’s just not care?  “It’s business”, they say. But really it’s more than business to the players and coaches.

I watched as my team lost Coach Pagano today.  I watched Coach Del Rio, Coach Caldwell and Coach Fox be added to the unemployment list.  Then I saw players interviewed and realized it’s not “just business” to those who don’t sit in the front office.

“He was more than a coach to me,” said one player.  “When I came on this team I had a lot of family problems and he listened to me and helped me.”

“I was a rookie and he helped me learn the ropes with patience.”
“He was more than just a coach.  He was a friend.”
And on and on.  Players talked about how coaches were more than just play callers and helmet-patting sideline men.

As Christians, we have one of those irreplaceable not-just-a-coach on our team.  Jesus cares about what’s going on with your family.  He leads you everyday as if you are still a rookie Christian.  He not only helps lead your decisions in your everyday life, He is also your friend.

It’s not just a game to these NFL coaches.  It’s a big family; a group of believers, individuals, who need someone to listen and guide them on and off the field.  And a lot of these football coaches do just that.  Invite Jesus to be YOUR coach today and let Him guide you throughout every play of your life.