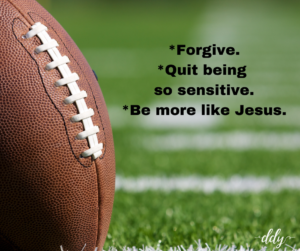 But as silly as it seems, God has been working on my “almost hatred-like feelings” toward that man.

In my Bible study this morning, Priscilla Shirer asked the reader to think about Sensitivity – specifically sensitivity to taking offense by actions or words from others.  Sensitivity is one of the key ways Satan traps believers in his web of deception.

And wallowing in being offended can cause negative feelings such as jealousy, outrage, hatred and anger to name just a few.  And yes, overcoming those feelings is a MUST as we strive to become more like Jesus every day.

Confession time – just the words “Tom Brady” bring out the anger in me.  🙂

I probably am jealous and outraged at his success.  And as much as I hate to admit it, his story is actually remarkable:  he was backup quarterback on his JV team in high school.  He was backup in college and backup in the pros.  But when given a chance, Brady said he had to be ready so that he could show he should never go back to being a backup.  And he certainly did that.

He doesn’t make it easy to like him, that’s for sure.  He yells at his teammates, throws his helmet, is arrogant and was a member of the most-hated of the 32 teams in the NFL until this year.

But I saw a different side of him when he golfed in the charity event with Tiger, Peyton and Phil (no last names needed) and again in an episode of Peyton’s Place on ESPN+.

I know it’s silly but the awful feeling that stirs inside of me at just the site or the name of Tom Brady is something I do not like.  It’s the dumbest thing.  Tom Brady doesn’t know or care but the anger and chaos it causes me affects my mood and my attitude.

So, thanks to Priscilla Shirer’s Bible study, I find it time to grow up.  Time to forgive Tom Brady for something he never even knew he did.  Time to LET IT GO and not allow anger and jealousy and hatred to rise up inside of me.

Yes, my friends who know me well……..sit down.  I am moving past the anger and ill feelings toward Tom Brady.  Pride was clouding my view.  He will still NEVER be the Greatest of All Time (GOAT) in my book but he can certainly share the row with Peyton.  🙂