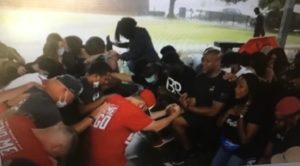 In the midst of all the chaos in this world, I didn’t even know where to begin to write.   I was afraid anything I said would be wrong.  But then I saw this picture and watched this 24 second video from a group in Houston, Texas where the white community bowed and asked the black community for forgiveness for years of racism.  Then the black community accepted the apology and bowed and asked for forgiveness for years of holding back forgiveness and for acting out in anger.

Then they all prayed together.

Holding hands and grasping arms and touching the shoulder of the ones in front of them.  They came together as ONE nation under God.  One people created by God.

The media wants to continue to portray only the negative but we must believe there is good in this world and we must do our part and show love to ALL people.

In Ephesians 6:12, Paul clearly tells us that our struggle is NOT AGAINST FLESH AND BLOOD but against the powers of this dark world and against the spiritual forces of evil.  We are all fighting the devil, not each other.

It’s sin that causes all of this heartache.  And the only way to fight against this evil is to come together and stand our ground with truth from God, prayers, the Bible, faith and salvation.

Please join me in not pointing fingers, not blaming, not rioting, not hating and not becoming angry but rather in coming together as one body created by God, praying on our knees like there is no tomorrow, witnessing to others about the salvation of Jesus and standing strong in faith that God uses all things for the good of those who love Him.  (Romans 8:28)

Let’s use this time of chaos to come together as ONE and allow God to give us peace in the middle of our hurt.

You can see the video here.

3 thoughts on “Let Us Come Together As One”