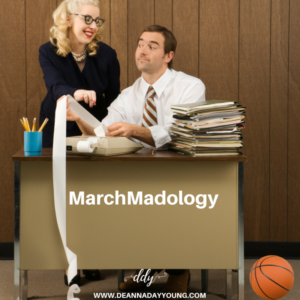 MarchMadOlogy: the act of making one crazy while trying to scientifically figure out the NCAA brackets.

It’s March Madness time, people!!!  Let’s get ready to rumble!!  Or tumble.  Or fumble.  Or crumble!

That’s what filling out those brackets do to so many people.  MarchMadOlogists analyze the players, the team, the coaches, the wins, the losses, the strength of schedule and the statistics of each player for each game.  They may look at how far it took a team to travel to see how well they did in the climate to which they traveled and even check out the means of travel to figure in the likelihood of jet lag.  Who knows…some people may evaluate what the team has for lunch that particular day and what color of Gatorade they were drinking when they played their best.

I, on the other hand, come at it from a more scientific approach:  what color are their uniforms; do they have a cute mascot; is there someone on the team who has overcome a rough life to excel in the sport; and is the coach as mild manner as say, Tony Dungy, on the sidelines?  Sometimes I just stare at both team’s names and decide which one just “feels right” at the time I have to fill in the blank.

This year, I’ve got some favorites:
*Always love Coach Greg Marshall at Wichita State because I met him one time;
*Purdue is one of the top ones for me because I have a lot of friends who love Purdue;
*St. Bona something because a guy I work with’s wife’s family went to school there;
*Tennessee because I love the Smokey Mountains;
*Michigan because I really love that coach and there is that story about their plane mishap last year.  Oh, and I just really love blue and yellow together.
*But for me Michigan State comes out on top.  Why?  Because I have a friend who is having twins and she loves Michigan State!