The runners are set on their starting blocks.
Hands strategically placed on the asphalt.
Finish line only 100 short yards ahead.

There is no need to remind them to stay in their own lane.  It’s an unwritten rule.  No one would think about veering from their own lane into another lane… would they?

Of course not!  And we shouldn’t either.

I just came home from an awesome speaker and writer conference in North Caroline where there were over 800 women soaking in information like sponges.  Most were striving to become better speakers or writers; some with pounding hearts and sweaty palms hoping to get a nod from a publisher; others seeking diligently for God’s clear direction.

So today, I vow to stay in my own lane.  Elbow the devil out of my lane.  Stay MY course and not worry about comparing myself to others.  God has called me to do what I do and as I grow in my writing and my speaking, He will clear the path in my own lane and help me run the race I’m called to run.

Have you lost sight of your own race?  Are you scooting over into someone else’s lane?  Refocus.  Get set on your own starting blocks.  Run your own race.  Make a difference in your own lane.  Get ready….set…..go. 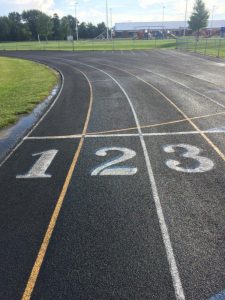 One thought on “Stay In Your Own Lane!”