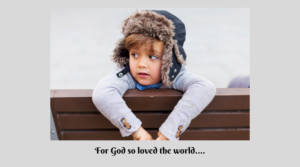 *She sat in the corner at recess hoping someone would ask her to play.
*He stood on the rocks just waiting for the nod to join the kickball game.
*She waited by the phone for her invitation to the party.
*He paced the hallway hoping she would say yes to the prom.
*She checked her email again for a second interview request.
*He stood outside the church drumming up the courage to climb the steps.

Everyone has a need to be wanted.  To be asked to join.  To be accepted.  To be a part of something bigger than themselves.

And when that invitation or nod or phone call or open door comes, it’s exhilarating!  You’re on top of the world.

Until the next time you wait for the answer, the invitation, the call, the text.  And the feeling of loneliness and fear of non-acceptance creeps in again.

It doesn’t have to be that way when you know Jesus.

Say Yes to Jesus.
Walk up the steps.
Open the door.
Read the Bible.
Get on your knees.
Lift up your hands.
Bow your head.
Accept the gift.

John 3:16 – For God so loved the world that He gave his One and Only Son to die so that whoever believes in Him will not perish but have everlasting life.